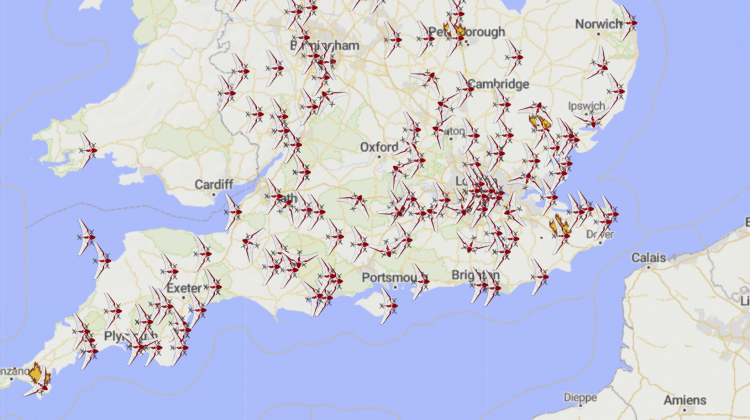 Several fires affect England throughout the year, some of them destroying vast areas of land, and while firefighters do their job amazingly, it is possible to improve the quality of the fire fighting activities by sending drones to the fire location in order to gather information before and during the mission.

The purpose of this project was to choose the correct drone design (endurance and speed), the right number of drones to use in the country and the geo-location of hubs where these drones must be located in order to cover as much land as possible while maintaining low costs.

The simulation model was built in AnyLogic using an Agent-Based approach, with three agents interacting with each other: the drone, the fire station (where the hubs are located) and the fire.

The fires generated in the simulation model were all the fires that happened between 2014 and 2018. The purpose was not to predict how fires would attack in the future, but to find a pseudo-optimal solution for the drone design and distribution assuming that the fires will maintain the same behavior. The model also considered wind data, which affected the movement of the drones and the altitude in which they would fly to reduce its effect.

An optimization experiment was developed with the following objective function with C as a cost function of the endurance and the number of hubs and drones:

With the following restrictions :

The most powerful feature of heuristic methods is that they use random parameters and search in the surroundings of the objective function space if a good solution is found. Nevertheless, the size of this problem is too big and too complex to handle appropriately. With almost 1400 fire stations, the optimization algorithm would need to have one variable (number of drones) for each fire station, and this would require insane computer power to handle.

To simplify this, a random generator seed was used (called hub seed). The optimization algorithm will generate a solution based on the hub seed and the number of drones, which will define a network of randomly distributed hubs with a random number of drones on each hub and if a good solution is found, it will try different endurance values to find the best one for that network. This method relaxes the optimization by thousands of times and should still produce good results, in particular because the fire stations are already distributed based on the fire distribution requirements in the country.

As usual in my projects, the client is most of the time very involved in the project and uses the tool provided to make his own analysis using the model and the excel export generated by the model with raw data from the simulation. The study now continues on the client side using the simulation as part of the full study.