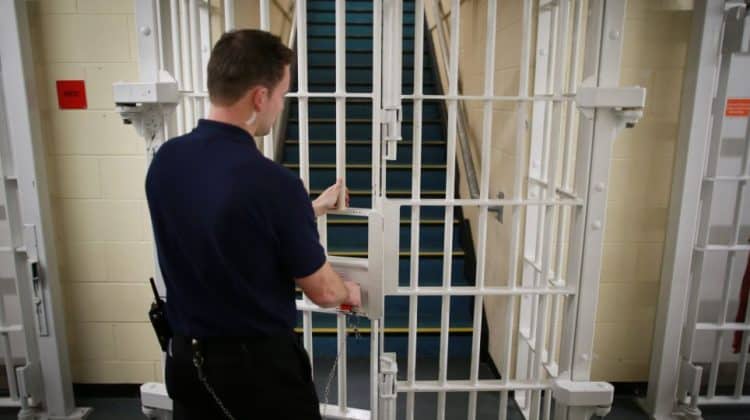 The prison population of the UK has increased more than 400% in the last century and about 90% from 1990 to 2016. These numbers seem alarming and generate an incentive to spend resources in order to understand the projection in the next 20 years under a scenario where prisons are already overcrowded.

Nevertheless these numbers are perhaps misleading, considering that since the prison population reached it’s maximum in November 2011, it has since then stagnated as can be seen in figure 2. So, has the UK reached a plateau? Will the population continue increasing with no control? 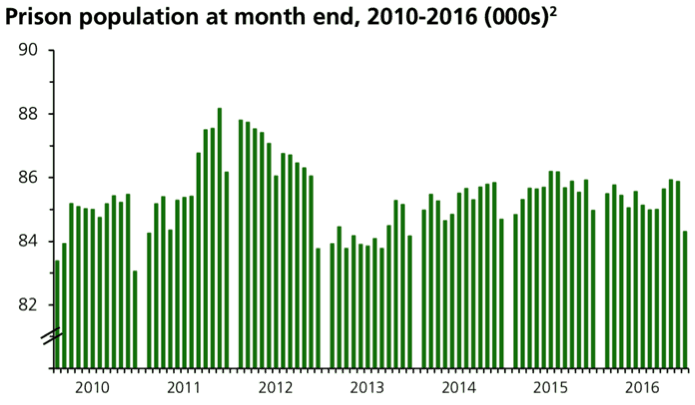 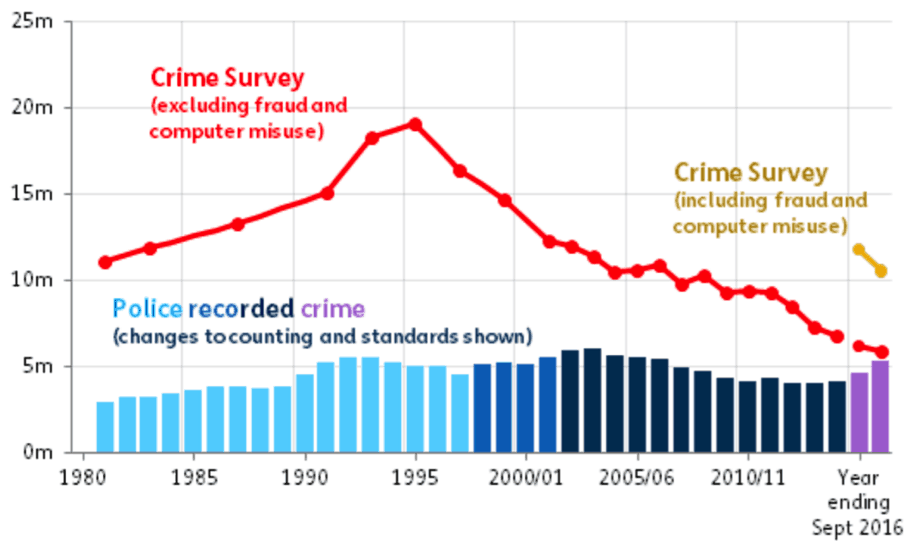 In this study the objective was to analyze what seems to be a problem in the eyes of the media and general citizens of the UK, which is the rapid growth of the prison population in the last few years in the country. By using public data available from the government, the idea is to generate a model that will represent computationally the current state of prisons in the UK, and estimate how the population in these prisons will evolve in the next 10 years.

The simulation was built with a multi-model mind-set, being agnostic to any particular one of the three most widely known simulation paradigms: discrete-events, agent-based and system dynamics. The system that defines all the processes associated with the criminal justice procedure is stated in figure 4. This is the process that needs to be simulated. 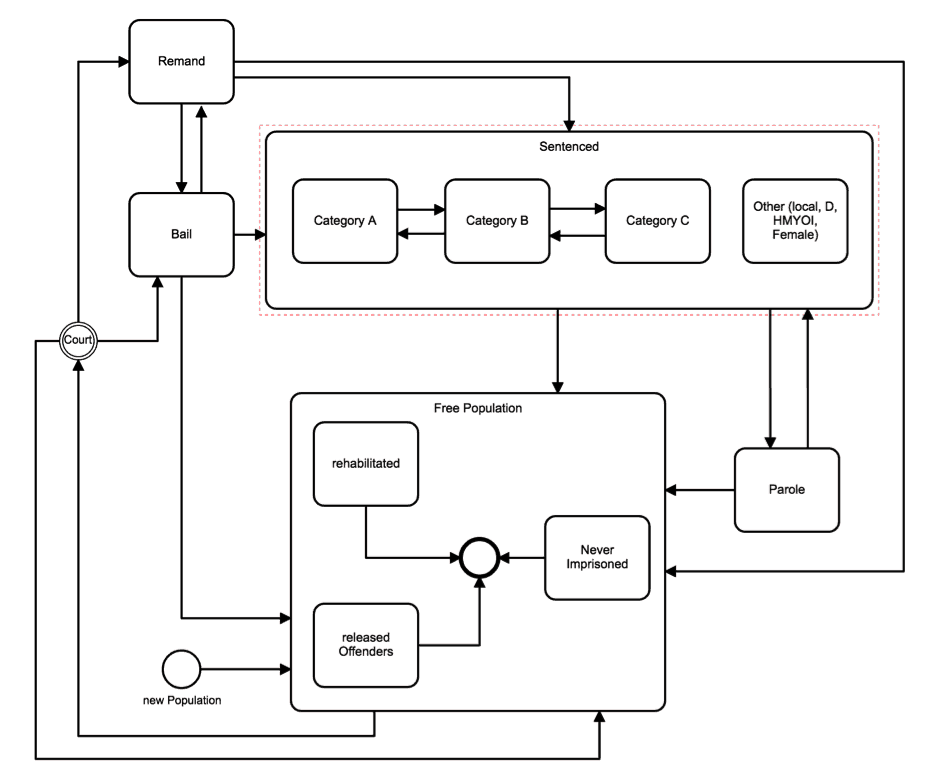 Figure 5 shows a piece of the System Dynamics model that represents the abstract macro view of the system. It shows the high level vision of the population dynamics, where new population arrives at an annual rate, and is put in prison also with a certain rate. This section of the model stores the rehabilitated and released offenders to have a general view on the evolution of these populations, while also showing the total number of prisoners and UK total population.

The Discrete-Events model represents the criminal justice process for people that do criminal actions and are put into court and processed to define a sentence or be put free. The new criminal cases come from the 3 different sources: never imprisoned, rehabilitated and released offenders. These individuals are put into court and can be either freed, put in bail or put in remand. Later they can be also be sentenced and put in prison. These events occur with a certain probability based on the court final decision. The individuals sentenced are counted and the rate is calculated in order to coordinate the number of sentenced individuals in the discrete-event model with the number of sentenced individuals in the system dynamics model. A section of this discrete model is shown in figure 6.

The Agent-Based section of the model was generated with the objective of understanding the main transitions from one state to the other for an individual potential prisoner, actual prisoner or individual in parole. When an agent is generated in the discrete-events model, an offender agent is created and defined by the state chart in figure 7. 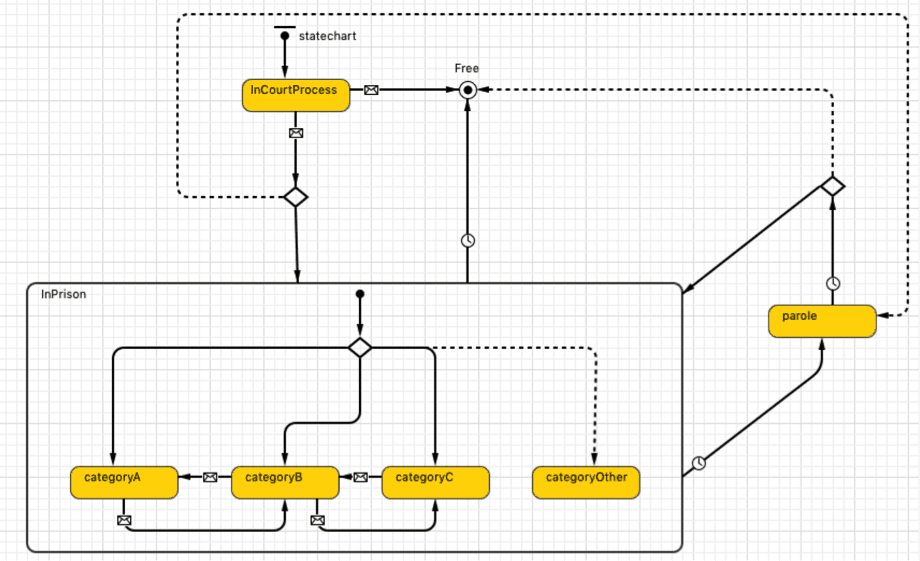 There is misleading information in regard to how the prison population is evolving in the UK. Some sources hypothesize that the pressure of the media and the changes in sentences length are the key factors that lead to a severe increase in the population and overcrowding of more than 60% of the prisons in the UK. But the policies always switch towards the tendencies that are currently happening. Overcrowded prisons can lead to a reduction in sentences, and more people being released on parole. The prisoners who have been in prison for long periods of time since the changes in the policies are aging and it should be expected, considering the reductions in crime in the last years, that the population in prisons should stabilize in the short term and decrease in the long term.

The results show that overcrowding leads to putting more category A prisoners into category B facilities, which can decrease the safety perception from the UK citizens and add pressure to develop less aggressive policies for less dangerous convicts. The simulation shows this problem but also the problem stabilizes in the long run with “category A” prisoners returning to the “category A” facilities if the sentences lengths are effectively controlled.

This study showed how the increase in prison population may not happen and this is also consistent with statistical analyses, that even though show a small increase in the long term, the confidence interval is quite wide and having a decrease in the population is perfectly plausible given the statistical data. It is then expected for the prison population to keep rising slightly in the short term and later start a slow and steady decrease, which by no means will be enough to solve the problem of prison overcrowding, but will certainly reduce the pressure to increase the prison infrastructure.