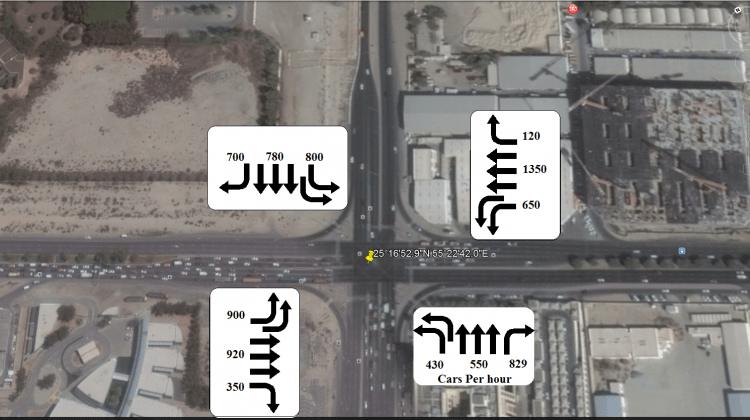 Additionally, in figure 3 there is a front lane area which defines the cars that are in the first row when the light is red, a 50 meters line that defines how far the camera is able to see and a 100 meters line that is used to analyze accumulation of cars.

To be able to accurately compare fixed traffic lights with intelligent traffic lights using cameras, it is important to optimize traffic light durations. To do this an Optimization experiment was performed in AnyLogic. The duration of the four green lights are defined as the parameters to change with an objective function equal to the number of cars processed. The duration of the green lights was set to be between 10 and 80 seconds with one-second intervals and setting car arrivals to be fixed to avoid stochastic challenges. The optimal durations of the green lights after the optimization with a total of 7164 processed cars in an hour were:

Nevertheless, the algorithm that gave the best results is shown in figure 2.

This algorithm has two parameters that need to be optimized in order to be successful. The first one is the maximum number of cars that need to be waiting after the 50meters mark in order to turn the light from green to red and the second is the minimum number of cars to be waiting to turn the light from red to green. Through an optimization experiment, the best values were 13 and 17 seconds respectively.

This study has shown that in this intersection in particular, with a high flow of cars and intense traffic it is possible to use cameras with only 50 meters reach to improve not only the flow of cars but also to decrease waiting times. The algorithm used in this study is very simple and uses basic information to make decisions. The improvement using this algorithm is only of 1.7% of the traffic flow, so the economic implication of having this technology in place should be considered compared to the benefit of having a 1.7% increase in traffic flow.